On Thursday, I was part of a panel entitled ‘Heritage Arts and the Contemporary’ at Goldsmiths, talking about contemporary Cambodian art and performance in response to Fractured/Khmer Passages by Thomas Buttery and Jai Rafferty, produced by Annie Jael Kwan. This was one of the first events of this year’s SEA Arts Festival. It was really fascinating as Thomas, Jai and Annie were all in Cambodia doing the research for this artwork (as well as other installations they’ve created) at the same time as me but we never coincided in Phnom Penh. Their work-in-progress projected films of dancers and musicians that were refracted (fractured) across surfaces combined with a voice-over from interviews including Arn Chorn-Pond. The piece and its form spoke to the literal and metaphorical cultural ruptures that have resulted from the Khmer Rouge, highlighting how these persist through to the present rather than there being a single ‘break’ with the past. 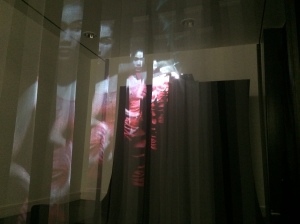 The panel (also including Hi Ching, Reaksmey Yean, as well as Thomas, Jai and Annie, chaired by Barley Norton) had a really great – and at times heated – discussion about contemporary Cambodian arts. We all felt that it was on the cusp of something, a change, a new direction that was being forged even as there was a recognition of traditional arts and performances, and of the legacies of the Khmer Rouge. Barley asked us some interesting and tough questions about whether discourses around tradition had been replaced by heritage, and whether the seeming break between the genocide and thus ‘traditional’ performance followed by rapid globalisation obscured other narratives and influences. We talked a lot about the title of the work, of Cambodia as a fractured society, with Reaksmey viewing it in terms of the intersection of different forces and ideas. We spoke a lot about the choices that artists make, about whether there even are choices for Cambodian artists who seem to have a direct link to the forces of contemporary capitalism and the transnational arts circuit, and whether such interactions prescribe certain forms of work over others. In even discussing this, however, it seemed that certain (western) value judgements about ‘good art’ were being made, when Cambodian artists may not view it in those terms.

On the Friday I returned to Goldsmiths to watch  Phnom Penh, Rescue Archaeology: The Body and the Lens in the City. A piece curated by Erin Gleeson of Sa Sa Bassac in Phnom Penh, it is composed of ten videos of performance works by seven Cambodian artists (Khvay Samnang, Lim Sokchanlina, Anida Yeou Ali, Sok Chanrado, Leang Seckon, Tith Kanitha and Svay Sareth). The works all speak to Phnom Penh’s rapid urban change, particularly as a result of land grabs, as Cambodia’s neoliberalism wreaks ever increasing inequality and violence. I particularly liked Svay Sareth’s piece Mon Boulet where he documents walking from Siem Reap to Phnom Penh pulling a giant metallic ball. The piece was by turns funny, as you see him going down narrow lanes and passages, as well as holding up the traffic on some of Phnom Penh’s busiest roads, but also very poignant, as the ball represents the bulldozing of Cambodia’s rural and urban landscapes. The sound of the metallic ball crunching over stones and pebbles, becoming covered in clods of mud as it ‘gathered’ material and momentum, speak to the seemingly unstoppable pace of change and the destruction of ways of life. All the videos were highly evocative, reflecting the fact that as Phnom Penh undergoes rapid change, artists are trying to ‘rescue’ physical and personal memories.

All in all, I had a great time and it was lovely to start thinking again about some of the new research that I’ve been doing.